The goal of vision research is to be able understand the information encoded in images or in a sequence of images. The Computer Vision group in the Department of Computer Science at the University of Western Ontario has a strong history in low-level image analysis problems such as optical flow, stereo, image segmentation, tracking, multi-view reconstruction real-time robot vision, Markov random Field optimization and much more. Solving these problems helps to create computer systems that are not "blind" to their environment, that can effectively perceive, analyze, and communicate with their environment. Broadly speaking, the goal is to allow a computer vision system is to answer the questions of "Who, Where, and Why?", given images or video streams.

Our group has received several prestigious awards including the Florence Bucke Award (Western), Early Research Award, and best paper awards at conferences. Two of our researchers received a Test-of-Time Award from the International Conference on Computer Vision for work that has as been shown to have significant and long term impact in the field of Computer Vision. The research is supported by grants from NSERC, CFI, and Agriculture Canada. Google uses discrete optimization algorithms developed by this group for Google Earth and Microsoft for Microsoft Office 2010. Optical flow algorithms are being used for storm tracking. Vision and image analysis systems are being developed for analyzing ultrasound for medical purposes and cars of the future. 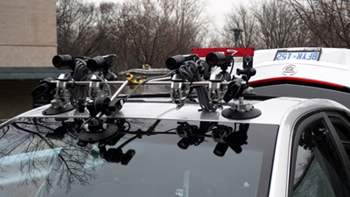 Cars of the future should be able to see the surrounding environment, gauge drivers reactions using facial expressions and take necessary actions. Researchers are working on software that processes the information acquired from the instrumented car which includes the car's diagnostic system, cameras and GPS. This information is used to determine how the driver should react. If the driver does not react as expected then a corrective action may be needed. Western researchers are focused on the car instrumentation and the development of vision algorithms that track eye and head motion in order to gauge drivers reactions.

Ultrasound imaging provides a non-invasive inexpensive means for visualizing various tissues within the human body. This makes the use of ultrasound images attractive. However, these visualizations tend to be filled with speckle noise and other artifacts due to the sporadic nature of high frequency sound waves which makes it a challenging problem.