The most frequently asked questions we get from students are about what happens after one graduates. Some of the questions that they ask surround:

"Despite serious economic challenges confronting the nation, computer science-related jobs are among the fastest-growing and highest paying over the next decade," said Alfred Spector, vice president of Research and Special Initiatives at Google, Inc. "These times require an increasing supply of diverse students exposed to rigorous and engaging computing courses at the K-12 level, and National Computer Science Education Week can help to reinforce this effort.", Quote from the ACM 2009 article on the U.S. House of Representatives passage of a resolution to raise the profile and highlight the importance of computer science and encourage study in the computer science field.

In the summer of 2011, a SD Times article states that "Computer science graduates now get more offers of employment than any other major." That same article quotes Annabelle Evans, a recent computer science graduate as saying "I got four different job offers while my friends in other majors getting any," she said. "When I picked my major, I knew there wouldn’t be a lack of jobs as a computer scientist, and that was part of the appeal.". Evans now works at Google.

A computer science degree also is one of the few degrees you can graduate with and find a job almost immediately, without having to do further training or do post graduate work. 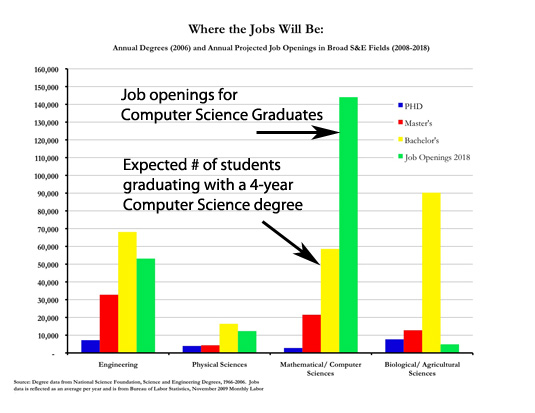 Canada's ICT sector, representing the country's information, communications and technology employment base, is facing alarming skills and labour shortages in the next five years.

If you are hoping your career path leads you into the exciting world of gaming programming, a Computer Science Degree from Western University with a specialty in "Game design and development" is one of the best ways to open the doors to those very companies.

Think that all the good gaming jobs are in the United States? THINK AGAIN! So then you may be thinking: "Yeah, but all the Canadian ones are only in Toronto or Vancouver". THINK AGAIN!

Here are some located right here in London, Ontario

Check out this website with all the gaming companies in Canada http://www.candevs.ca/

There is a wide range of possibilities for Computer Science graduates. We have alumni working for Boeing, Northrop, Intel, Google, Apple, Microsoft, Electronic Arts, Amazon, Pixar, SAP, business corporations, engineering companies, hospitals, and missionary organizations. Every company has a need for a computer graduate, whether it is to develop new products, research, program, train etc. The demand is there.

Many of our graduates have gotten jobs as:

Quotes From Some Computer Science Alumni

"IBM plans to announce Monday that it is in the final stages of completing a computer program to compete against human 'Jeopardy!' contestants. If the program beats the humans, the field of artificial intelligence will have made a leap forward. ... The team is aiming not at a true thinking machine but at a new class of software that can 'understand' human questions and respond to them correctly. Such a program would have enormous economic implications... Read article

Scientists at IBM are experimenting with using DNA molecules as a way to create tiny circuits that could form the basis of smaller, more powerful computer chips. The technique builds on work done by Cal Tech's Paul Rothemund, who found that DNA molecules can be made to 'self-assemble' into tiny forms [PDF] such as triangles, squares and stars. 'To make a chip, the scientists first create lithographic templates using traditional chip making techniques. After, they pour a DNA solution over the surface of the silicon and the tiny triangles and squares — what the scientists call DNA origami — line themselves up to the patterns etched out using lithography.' DNA-based chips may sound like crackpot tech, but those involved believe the methodology could lead to a new way of fabricating features on the surface of chips that allows semiconductors to be made even smaller, faster and more power-efficient than they are today." Read article in slashdot.org and Read article in Info World

According to CNNMoney, numbers 4 and 5 on the list of "15 Top Earning Degrees" are computer engineering and computer science degrees. Read these articles to find out what a computer science graduate could potentially earn:

The rapid and widespread use of computers and information technology has generated a need for highly trained workers proficient in various job functions. These computer specialists include computer scientists, database administrators, and network systems and data communication analysts. Job tasks and occupational titles used to describe these workers evolve rapidly and continually, reflecting new areas of specialization or changes in technology, as well as the preferences and practices of employers. Read More

The Canadian Salary Survey provides a summary of the range of salaries that are currently being earned by professionals in each of numerous occupations appearing on the General Occupations List.

The following table represents a survey of starting salaries and consultancy fees (all figures in CAD$) for information technology professionals in Canada.

Computing Careers Guide:  The field of computing has expanded rapidly over the past 10-15 years, and students need better information about the field and its related careers.     In reality, there is no single computing discipline but at least five. Including different sub-specialties, there are dozens of possible computing educational paths for prospective students.   FREE computing carees guide available here:  https://ceric.ca/resource/computing-disciplines-quick-guide-prospective-students-career-advisors/